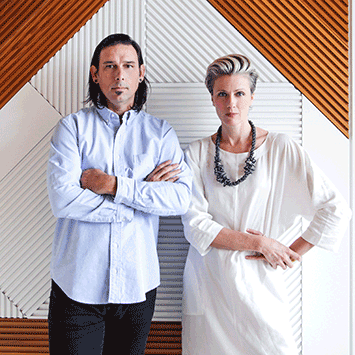 Barbara Rourke and Jason St. John are co-founders and principals of the award-winning interior design firm Bells + Whistles. The two met in 1998 in San Diego as they explored independent artistic pursuits. Rourke had just launched a handmade leather handbag and accessories line, while St. John, a native San Diegan, was an avid painter taking furniture design courses at a local college. Having always had an interest in furniture design, Rourke also enrolled, and the two were soon urged by a professor to pursue their own business. Bells + Whistles was established in 2000 as a custom furniture design studio, which organically morphed into the design-build, full service interior design firm that it is today.

In 2007, after creating custom furniture for local restaurants, salons, and boutiques, Bells + Whistles was commissioned to transform an aging dive bar into a modern lounge and restaurant. Along with frequent collaborator Jason Lane of JXL Studio, the pair designed, built, and installed every element of San Diego’s now-iconic Starlite. Influenced by midcentury icons and Alfred Hitchcock’s film North by Northwest, the timeless award-winning eatery was included in San Diego Magazine‘s list of Bells + Whistles’ “10 Most Instagram-Worthy Restaurants” in 2016. In 2012, Bells + Whistles relocated to Los Angeles. Splitting time between LA and San Diego, the team continues to make their mark on most of Southern California and beyond, collaborating with celebrated chefs like Ray Garcia and Javier Plascencia.

Additional projects include the Coffee Bean + Tea Leaf, offices for Facebook and HP, and ten unique Juice Served Here locations throughout Los Angeles and Orange counties. Recent completions include the restaurant Campfire in Carlsbad, California, and Bacoshop in Culver City. Projects in development include a winery renovation in Temecula, California, common spaces for a new 400-unit condominium in downtown San Diego, and a 4,000-square-foot restaurant in Dubai.