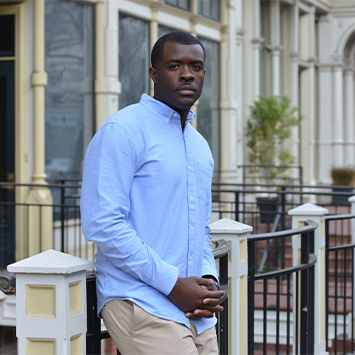 Damon’s experience in hospitality stretches among some of the best brands in the world. A graduate of Howard University, Damon first began his hospitality journey in the nations capital as a front desk agent for the Thompson Hotel Group’s Donovan House Hotel in Midtown DC. From there, Damon moved within management ranks at companies such as Ritz Carlton, Intercontinental Hotel Group & Dusit Thani International for a career than spans over a decade. After witnessing a lack of African American representation in brand ownership and leadership, Damon created the Homage Hospitality brand in 2018 and oversees operations and creative direction.

Since launch Damon has won Boutique Design’s Up & Coming Hotelier of the Year in 2019 and followed it up with a Gold Key award the same year for the Best Emerging Hotel Concept from Hospitality Design for their New Orleans property The Moor. With Hotels slated in Albany, GA, New Orleans, and Memphis, Damon looks to take the Homage brand to new heights.