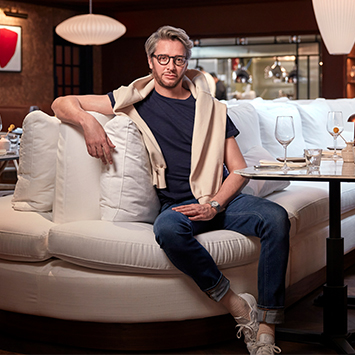 Jacu Strauss is the Creative Director of Lore Group. Throughout the design process Jacu places emphasis on exploration and experimentation as a means to showcase the beauty and characteristics of each project and its context, uncovering the stories that bring to life the destination in which each Lore Group property sits.

Jacu and his team led the complete redesign of award-winning Dutch hotel, Pulitzer Amsterdam, and Lore Group’s debut U.S. property, Riggs Washington DC which opened in February 2020. Jacu and his team design and create bespoke furniture, fixtures and equipment for each project. In addition, as Senior Designer at Tom Dixon’s Research Studio, Jacu designed South Bank lifestyle hotel, Sea Containers London, and has since re-imagined various spaces throughout the hotel, including the award winning Lyaness bar, as Lore Group’s Creative Director and Designer.

Currently London based, Jacu has lived in several countries across the globe, beginning his architectural training in New Zealand and going on to study at the Bartlett School of Architecture and Westminster University in London.

In concepting and designing both Pulitzer Amsterdam and Riggs Washington DC, Jacu relocated to each destination in order to live and breathe them, ensuring that the properties reflect the communities around them.