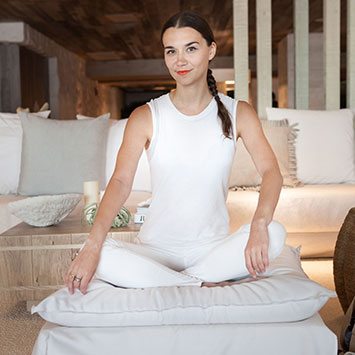 Liubasha’s first experience of hospitality was a dinner party in a Ukrainian house.  Guests brought flowers and wit, hosts produced ornamental dishes and bottles.  There were always speeches and singing set to the background of patterned wallpaper, millwork sets, Persian rugs on walls, embroidered tablecloths and shelves full of books.  The cacophony of spacial textures and immersive social interaction left its imprint, and Liubasha always aims to create environments that give guests multiple points of emotional connection.

Prior to founding Rose Ink Workshop, Liubasha was Vice President of Design at Starwood Capital Group. She was responsible for design direction and the execution of renovation projects for Starwood Capital assets, and was involved in the implementation of new brands launched by the firm. She has contributed to the development of the two luxury hotel and lifestyle brands, 1 Hotels and Baccarat Hotels & Resorts as well as the Postcard Inn, ST Residential portfolio, and numerous restaurants and hotels around the world.  While at Starwood Capital, Liu nurtured the design of the first 1 Hotel to open—the 1 Hotel & Homes, South Beach. As the SoBe keeper of the 1 Hotel aesthetic as it grew and developed, Liubasha led the multiple design firms on the project, designed areas of the project herself, designed and managed brand pillars from OS&E to uniforms, and brought in and collaborated with local partners to create an exciting cultural tapestry for the hotel and residences. The 1 Hotel, South Beach opened its doors March 24, 2015 to industry acclaim.

Liubasha holds a Bachelor of Arts degree in English from Cornell University and an Associates in Interior Design from Parsons School of Design. Prior to joining Starwood Capital in 2009, Liubasha worked as an interior designer at Tihany Design.