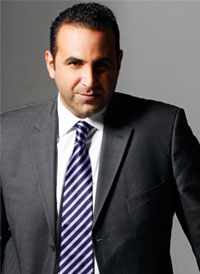 Founder, chairman, and CEO Sam Nazarian has led sbe to design many luxury lifestyle brands in North America, including SLS Hotels and Casinos, Katsuya by Starck, the Bazaar by José Andrés, and Hyde Lounge.

From the launch of sbe’s first nightclub in 2003, Nazarian has since aligned with design and culinary talents such as Philippe Starck and Matthew Rolston, and chefs José Andrés and Katsuya Uechi.

The youngest executive to be named one of the Top 100 Most Powerful People in Southern California by West, the Los Angeles Times‘ magazine, Nazarian was also named among The Influentials in Los Angeles Magazine and was recently honored with the Mondavi Wine & Food award and named the 2012 Hotelier of the Year by HotelChatter.com. He is an active member of the Southern California Institute of Architecture’s Board of Directors and a supporter of the Beverly Hills Education Foundation. In July 2009, Los Angeles Mayor Antonio Villaraigosa appointed Nazarian to the Board of Airport Commissioners of Los Angeles World Airports.

Nazarian studied at New York University and the University of Southern California.