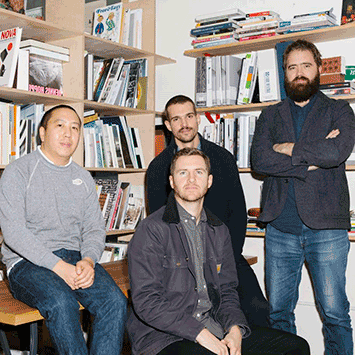 Founded in 2012, Studio Tack is a design and development group based in Brooklyn, specializing in hospitality and pursuing unique opportunities to create uncommon and lasting experiences. With an emphasis on collaborative design, Studio Tack strategically partners with dynamic developers, designers, and artists from across the country to ensure every property speaks to its locale and culture. The four-person team also represents a diverse group of people and thinking with backgrounds in architecture, interiors, real estate, construction, branding, and creative direction.

Prior to joining Studio Tack, Jou-Yie Chou served as the brand director of Ace Hotel Group, where he played an extensive role in brand direction, product design, new development selection, and strategic partnerships. He has also worked with marketing agency Neverstop, where he specialized in brand activations, experiences, and events for brands like Nike, Microsoft, and Uniqlo. He is currently on the board of advisors for Dogfish Head Brewery and The Hill-Side.

Telluride, Colorado native Leigh Salem received his master of architecture with honors from Columbia University. Following, he received his MBA from the New York University Stern School of Business in real estate and entrepreneurship. Over the last eight years, Salem has worked for design and strategy firms including Renzo Piano and KBAS. He has served on numerous hospitality projects such as Ritz-Carlton flagship resorts and boutique properties.

W. Brian Smith studied journalism and piano performance at the University of North Carolina at Chapel Hill, and also obtained his master of architecture with honors from Columbia University. A multidisciplinary designer whose work encompasses architecture, publication design, identity systems, advertising, websites, and mobile platforms, Smith serves as an adjunct professor with  Columbia. He has previously served as a visiting professor at the University of Florida and a national publicity campaign manager for St. Martin’s Press in New York.

Ruben Caldwell received his master of architecture from Columbia as well and also spends time as an adjunct professor with his alma mater. Boasting an immense knowledge of carpentry and construction with skills ranging from digital milling to hand-finished joinery, Caldwell plays a pivotal role in driving projects from concept through execution. He previously worked as a visiting professor at the University of Arizona, where he ran the school’s design-build studio.